Introduction to the Best Kebab Restaurants in Tehran

One of the most popular dishes in the Middle East is Kebab; it is often made by lamb or veal with onions and spices. To cook this dish, the meat is roasted in a metal or wooden skewer and set on a direct fire until it is fully cooked. The higher the Kebab’s diameter, the longer it takes to cook. The most famous types of kebabs are Chenje Kebab, Sour Kebab, Mashed Kebab, Barg Kebab, Soltani kebab, Doush kebab, Chicken Kebab, Shishlik Kebab, Bakhtiari Kebab and more. Given the appeal of this topic, in Travital we will continue on this article to introduce you to the best Kebab restaurants in Tehran so that you could go to one of them to eat a delicious Kebab. 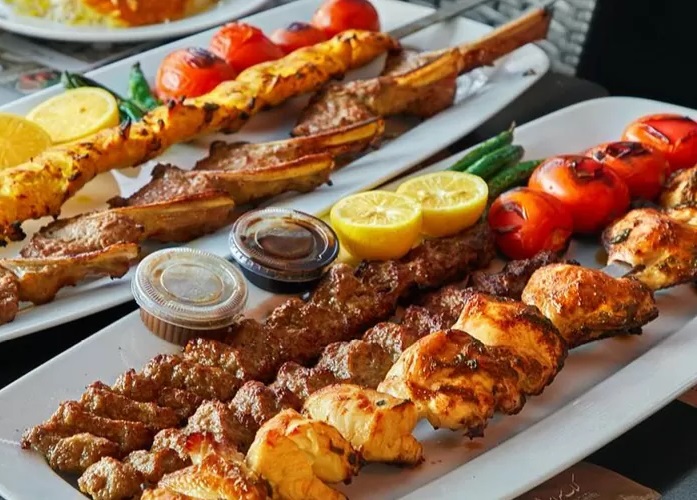 Well, the first restaurant on the list of the best Kebab Restaurants in Tehran is Moslem. This restaurant is located in the Sabze Meydan district and as soon as you enter this district you can see the location of this restaurant from the long queues standing for food. The restaurant is usually crowded and people are sitting shoulder to shoulder with each other. We recommend that you try the Tahchin and Broad Bean Rice with neck meat at this restaurant. It should be noted that this restaurant has been operating for a short period of time, with only fifteen years since its establishment.
Address: No. 4, Haj Rahim Khan Alley, On the corner of Sabzeh Meydan, Tehran Bazaar

One of the other Kebab Restaurants in Tehran which is working for decades and its Kebabs are spectacular.
The owner of this restaurant, Haj Mohammad Hasan Shamshiri passed away on 1340 SH and nearly 20 years before his death, established a respectable Kebab Restaurant in Tehran’s Bazaar. Mohammad Hasan Shamshiri was among Wealthy businessmen in Tehran’s Bazaar.
The Shamshiri Restaurant is very similar to the Moslem Restaurant in terms of quality and service and you have to endure long queues.
1sh Branch (Restaurant): Sabze Meydan, Bazaar
2nd Branch (Take Away only): Between Kaveh and Qeytariyeh, Andarzgou Boulevard 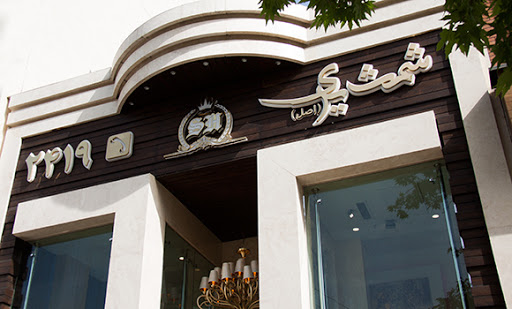 The Nayeb Restaurant is also a well known Restaurant in Tehran Which from 130 years ago have managed to keep its luxuary food for its rich customers. The main branch of this restaurant is located in binders Bazaar inside Tehran Bazaar, however the younger generation of the Nayeb family have established other branches across Tehran. People who love kebab in Tehran definitely keep Nayeb on their list for delicious food and good quality of service.

One of the oldest, most famous and best restaurants you can eat in Tehran is the Sharaf al-Islami restaurant. The restaurant’s reputation is such that many come to the Bazaar area just to eat at this restaurant. This restaurant is very old and is located behind the Imam Mosque (the former Shah Mosque). This family-run restaurant has been active in the Bazaar for several generations and is therefore highly trusted by business people and shopkeepers. The interior of this restaurant remains in the old style and reminiscent of old Kebab restaurant. On the other hand you will be greeted by a long queue almost every time you come for lunch, but the fast and professional restaurant service does not keep you waiting for long and you can expect to find a place to eat in a short time. Sharaf al-Islami restaurant dishes are all premium and oily and salty and in other words Bazaar people like it very much so don’t be surprised if you can’t finish a single meal you ordered. The best dishes in this restaurant include Tahchin, Shishlik, Broad bean rice with muscle, and Chicken and Barberry rice with satisfactory size and quality.

One of the other restaurants in Tehran which is among the best Kebab restaurants is Ghadah restaurant. This restaurant is located in the Carpet Bazaar of Tehran and it is so famous that the owner does not have to install a banner. The special taste of the kebabs of the Ghadah restaurant is something that you may not experience it elsewhere. The meat tastes like the local fresh meat. Iranian rice with local butter and saffron tahchin is the best example of the authentic Tehran Kebab.
Address: No. 76, Shahid Karbalaei Street, Opposite Seyed Nasr Al-Din Mosque, Khayyam Street

One of the other Kebab restaurants in Tehran which you could eat a delicious food is the Reyhoun restaurant in Jordan street. Over the years that this restaurant has been cooking all delicious food and kebabs, it has managed to gain popularity  and earn a spot on the list of best restaurants in Tehran. Basil, cheese and sangag bread along with mashed meat kebabs and unique crispy shishlik and delicious chicken kebabs which are being made by highest quality and from freshly slaughtered cows and sheep will make you have a great day.
Address: No. 18, Kaj Abadi Street, upper than the Niyayesh Tunnel, Jordan Street

Navid Restaurant on Suhrawardi Street is another option on the list of the best Tehran kebabs and it is always rolling. In this restaurant you are always welcomed and the taste of its dishes will be remembered. In addition to the good taste of this restaurant’s cuisine, its location on one of the busiest streets in Tehran has attracted many customers. The Navid is a nearly old restaurant with mediocre service, so if you expect professional waiters and great dishes, Navid is not the right one for you.
Address: After Golshan Street, Khoramshahr Street, Northern Suhrawardi Street

From other famous and popular Kebab restaurants in Tehran we could mention Shemroun Kebab House. Since this restaurant has good kebabs and good quality of service, it is among the best Kebab restaurants in Tehran and usually there no place to sit and you have to wait for the turn to sit. Delicious kebabs which are being made from best materials and 100 percent lamb are being served with warm bread and vegetables and they will make a memorable day for you in Shemroun.
This restaurant with good quality of service and respectful staff has created a good atmosphere. Do not forget to try lamb kebab and lamb loghmeh kebab in this restaurant.
Address: Northeast side of the Square, Tajrish Square

Mansour Kebab House is one of the most famous and old kebab houses of Tehran. This restaurant is well known among kebab lovers and many believes that it is among the best kebab restaurants in Iran.This restaurant is located in the Valiasr street it has a simple and not so luxurious atmosphere. The Mansour restaurant has several non original branches that one should be careful about. It would be necessary to know that Mansour restaurant it very busy during late nights and on holidays and you should be willing to stand in queue.
Address: Beside first stairway, Above Shahid Beheshti Street, Valiasr Street

Another restaurant you’ve probably heard of is Orchid Restaurant. Reminiscent of Chalus Road, this restaurant is a dream restaurant where you can taste the best of Iranian food. A branch of this wonderful restaurant is on the Argentina street. Kebabs are made from the finest quality meats served in half-meter tall skewers, along with a professional and relaxing waiter team who can make you have a very good time.
Address: Beside the Alvand Street, Argentina Square

It would be a pity to list the best Kebab Restaurants in Tehran and leave out the Haj Fazlollah Golpayegani and sons Restaurant. This restaurant which is located on Labafinezhad street, has the area filled with Turkey Halim’s smell on the mornings and on lunch and dinner the good smell of its delicious kebabs and nobody could resist its golpayegani kebebs. In this kebab restaurant they start giving receipts to customers from 12:00 and they mince the meat and with the help of a machine they put the meat on the skewer and all of this process is be done in front of the customer. It should be noted that besides mashed kebab, the chicken kebab and chenjeh kebabs are very delicious too.
Address: Valiasr Street, Labafinezhad Street, Between Fakhre Razi nad 12th of Farvardin Streets, No. 198

Other Famous Kebab Restaurants in Tehran