Get acquainted with the best historical monuments of Iran

Iran is a country with a long history, a rich civilization and a rich culture, with many valuable historical monuments from different periods. Iran was known around the world as a powerful empire once upon a time. There are many historical wonders in Iran that are very interesting for tourists interested in history and historical monuments. Follow Travital to get acquainted with some of the most beautiful historical monuments in Iran.

One of the historical monuments in Iran which has a special and unique architecture is called Imam Mosque of Isfahan. The facade of this mosque is elegantly covered with beautiful blue and yellow mosaics which gives it a stunning look. This mosque is so beautiful that when you visit you can walk for hours in the courtyard and around the mosque, carefully immersed in the architectural details and discover the undiscovered secrets of these valuable Iranian historical monuments.

One of the unique experiences that you should not miss when visiting the Imam Mosque of Isfahan is that under the center of the main dome, you should stand on a small square whose stone is of a different material. Talk loudly and This is an indescribable reflection of your voice! This experience alone is worth a visit to the mosque. 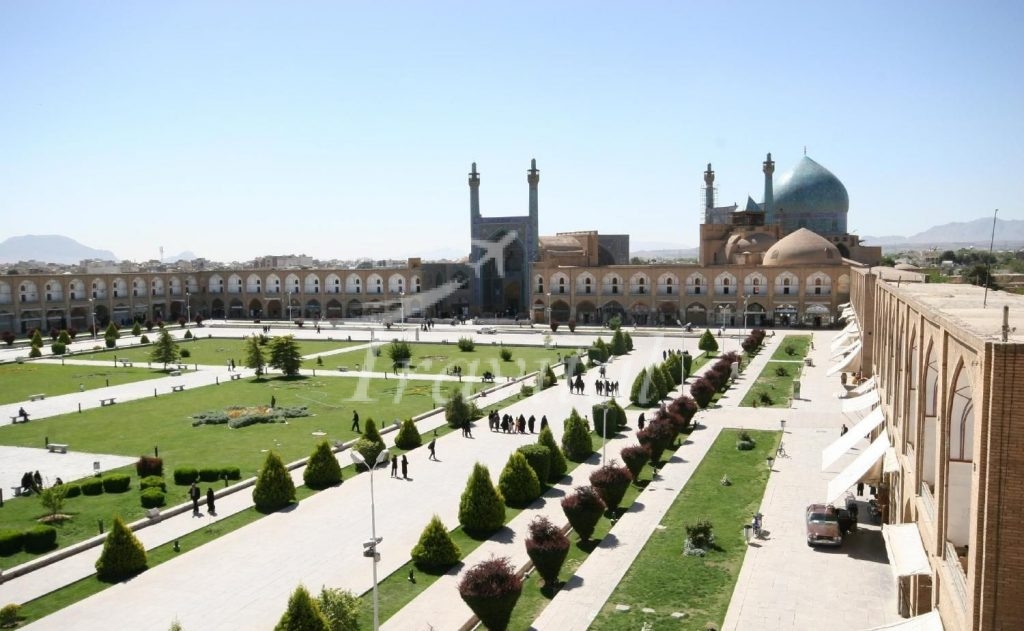 Since the Safavid dynasty used Shah Abbas Aali Qapu as a place to entertain guests, there is also a music hall at the top of the palace. Also each of the rooms of Aali Qapu Palace in Isfahan has elegant and beautiful decorations.

One of the world-famous Iranian attractions is the Nasir Al-Molk Mosque in Shiraz. Nasir Al-Molk Shiraz is also called the Pink Mosque. It is safe to say that it is impossible for tourism to enter this valuable Iranian historical monument and not be fascinated by the unique beauty of its architecture!

Nasir Al-Molk Mosque in Shiraz is one of the best Iranian historical monuments with unique architecture. So if you travel to Shiraz, we recommend that you visit the Pink Mosque in the morning. When the sun rises you can enjoy the quiet and relaxing atmosphere of the mosque. When the sun rises, the reflection of light from Nasir Al-Molk’s stained glass creates a mystical and unforgettable atmosphere for you.

It is better to know that in other hours of the day the mosque is full of tourists who have come from all over the world to visit its unique architecture.

Shiraz is full of unique Iranian historical monuments, each of which has unique architectural features. When the Nasir Al-Molk Mosque is crowded, you can reach Qavam Shiraz House with a short walk. The historic house was built between 1879 and 1886 and the façade of the building brings a special display of mirrors and mosaics to visitors. The interior and exterior architecture of Qavam House is very beautiful and amazing.

About 12 km northwest of Persepolis, there are some interesting historical monuments called Naghsh-e Rostam. Naqsh-e-Rostam is engraved on a mountain that was the final resting place of the Achaemenid kings. Unfortunately, the tombs in this place were raped by Alexander the Great but they did not affect their exterior appearance.

Famous Iranian monuments, Persepolis or the City of the Iranians which was the capital of Iranian celebrations during the Achaemenid Empire, are located 60 km northeast of Shiraz. Of course today there is nothing left but the ruined Persepolis is a glorious history. Archaeological ruins cover a total area of ​​1.6 square kilometres.

This magnificent ancient city has numerous majestic columns, two royal palaces and gardens. The Persepolis International Entrance Gate contains the names of explorers whose names were engraved on the walls thousands of years ago. Today, the wall is covered with a glass barrier for added protection.

Apart from the large number of tourists who travel to Shiraz to visit this historic site, the long and rich history of Persepolis has strengthened it.

Yazd is full of historic one-floor clay buildings hidden in the city’s narrow alleys. The architecture of Yazd’s historical monuments is very interesting and spectacular for those interested in visiting historical attractions. It is interesting to know that Yazd is known as the largest clay city in the world. Most of the houses in Yazd have a courtyard with a small pool in the middle.

Yazd is located in a hot-dry and deserted area, so in the past, windbreaks were used to cool indoors and increase air circulation. The architecture and structure of the Iranian windmills are so complex and interesting that it amazes everyone. Going to the top of the roof will bring you to another world.

Beautiful views of muddy domes along with magnificent windbreaks, create a special atmosphere for you. It is truly amazing to see the ancient architecture of the thatched city of Yazd from above.