Iran is country for any taste. Iran is a great choice for both adventure and nature travelers and for those who want to visit historical and cultural attractions. But now we want to talk about the Islands in south of Iran. It could be interesting to know that although there is only 1 island in north of Iran (Ashooradeh Island), in the south of Iran there exists near 30 islands in the Persian Gulf that are divided to 2 group: residential and non-residential. Keep up with us on Travital to introduce you to the best islands in the south of Iran.

One of the most spectacular and best island in south of Iran which you should definitely visit on your trip to the south of Iran is the Hengam Island. Since this island has preserved as an indigenous atmosphere, the visitors can experience the feeling of being privately present alongside the clear waters and white sands of the area during their trips to the island.

Traveling to the island you can easily see the various fish and aquatic species that are swimming. Watching the crabs up close is another exciting experience you can get while on the island.

Another important fact about the Hengam Island is that you can visit this island easily when you are on your trip to Qeshm Island. This is because the two islands are close and you can hire a boat to the Hengam Island while being on Qeshm.

Best time for travel to the Hengam Island is from middle of fall to the middle of May. In this part of the year the weather is very moderate in the region. If you want to see the dolphins of this region, you should schedule your trip for December and January.

One of the most famous islands in the south of Iran which everybody has traveled to it or at least heard about it is the Kish Island. This island has an area of 91 square kilometers and there are ground or aerial access to it.

It is worth mentioning that apart from aerial access you could travel to the island by train too. This famous tourist area has attractive tourist attractions such as Coral Beach, Dolphin Park, Greek Ship, Ancient City, Ancient City of Harira and etc.

If you would like to shop, you could search numerous Bazaars and shopping centers on the island and buy whatever you want.

After the Kish, another famous and popular Iranian island is Qeshm. This island is one of the biggest islands in south of Iran that has an area of 1500 square kilometers. For reaching the island, you could choose the ground or aerial routes and if you would like to enjoy your way to the island, our suggestion is that you buy a train ticket so that you would explore the Iran on your way too. Apart from the natural beauty of the island, it also has numerous antiquities, waterfront resorts and shopping malls, all of which have made the island a popular tourist destination. 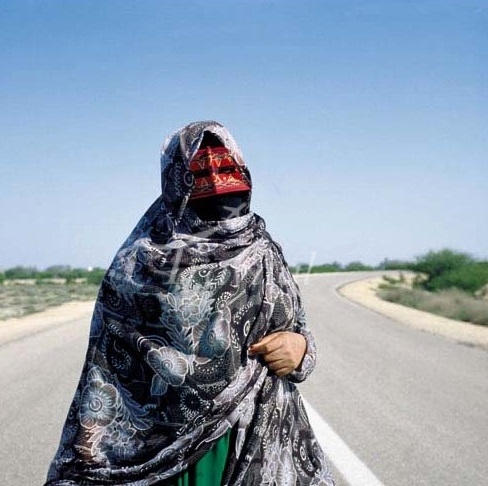 It would be interesting to know that Qeshm is the first Geo-Park of the middle east and has the UNESCO support.

Other notable attractions of the island are Hengam Island, Stars Valley, strait of Chahkooh and Geo Park and Hera Jungles.

After mentioning the 3 popular islands above, now it is time to introduce one of the other islands in south of Iran called Lavan Island.This Island which is among residential islands is located on 76 kilometers of Persian Gulf. The Lavan Island is also known has Sheikh Shoayb. 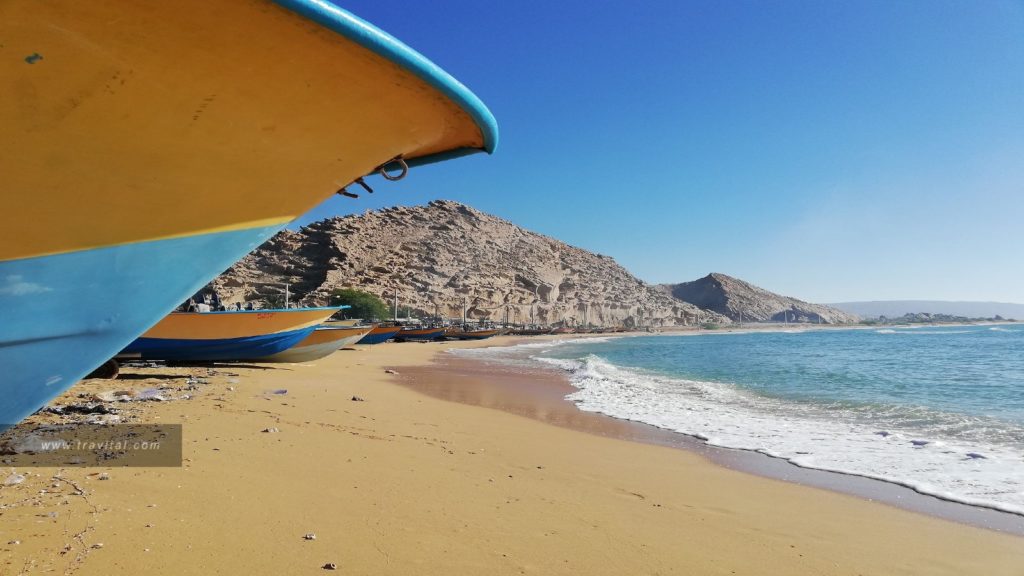 The temperature of the island riches 50c in summer and it is not a suitable tourist destination on this part of the year.

For going to the Lavan Island, you should first go to the Qeshm Island and from their you could reach Lavan Island by sea.

Do not forget that the facilities in the island is not much hence if you want to buy something it would be better to do it before going to the island.

For residing, There are suites at different prices and places to camp on the island.

Land of colorful soils, a place where the soil of red and sea of blue intersect. An island where it is said that it should be seen before death. From Qeshm island or Bandar Abbas (a port) you could travel to the Hormuz Island using lip or boat. 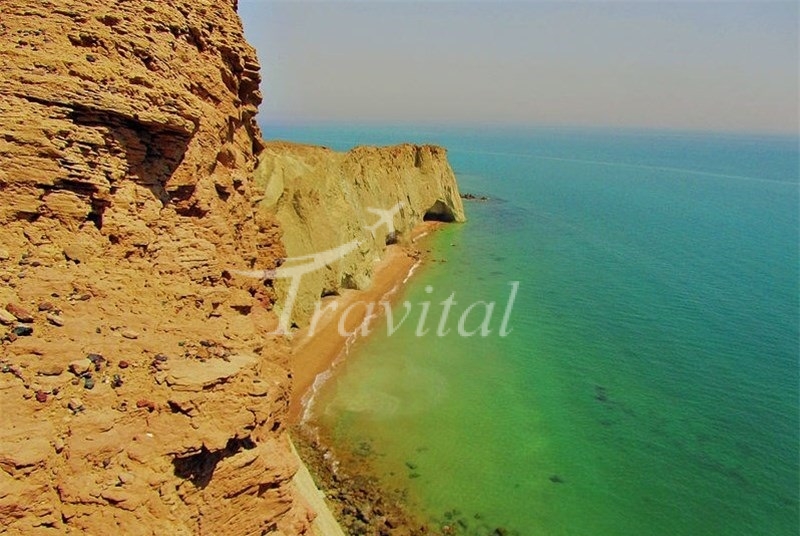 We suggest that you travel on the dawn so that you would have enough time to enjoy your trip and also you would be away from the direct sunlight during the travel. The last boat departs Hormuz Island to Bandar Abbas on 16:00 so make sure you have set your schedule on time. Also make sure you have enough food and water with yourself. There is not many residential place on this island so if you are planning to stay there at night you should camp somewhere or rent a room from residents.

One of the islands of Iran which could be said that is different from other beaches in Iran is the Naz. This island has beam of glowing sand during low tide that 3 crags has come out of the water.

During low tide with the tide going low there is a narrow crag that connects the Naz Island to the Qeshm Island. Although this time is short, however the visitors could see the Lark Island from heights.

It is interesting to note that the Naz Islands are part of Qeshm World Geopark and one of the seven wonders of the island. According to many experts, the area has long been a place for fishermen to rest.

Another island which is located between Kish and Lavan islands is Hendorabi which is situated at 30 kilometers distance from the Kish Island. The island is an ideal choice for those looking for a pristine place away from the chaos of chaotic cities.

The population of the island is 191 persons and most of them are fishermen. When you travel to this city, you can find evidences from the time Portuguese lived there in 9th Hijri century.

Another small island near the Hormuz Island also close to Qeshm Island is the Larak Island. On the weekends (Thursdays and Fridays) cruise liners travel from Haqqani Qeshm port to Larak, otherwise you can use the Doha Slack to reach. Please make sure you have food and water for your stay at this island.

We suggest you to stay at night there and enjoy seeing the spectacular beach and Phytoplanktons.

If you come all the way to the Lavan Island, you could also go to Maro island and visit this island too. This island is non-residential and you could hire a boat with 20-30 thousand Toomans from Lavan to Maro. Due to the large number of snakes in this island, it is not habitable. The Maro or Shidor Island is a habitat to many different animals and it is among protected regions in the country.

You should know that the cellphone reception is good on this island.

In this island there are 5 rivers running. A trip to this island will make you familiar with native culture, traditional food, handicrafts and etc of this island’s tribe.

It is a small island in Persian Gulf which is in the proximity of the Bushehr Port. The island is a muddy area within the Bushehr Gulf, whose texture and soil are not suitable for agriculture. Visit to this island is free and you could stay there for as much as you like.

One of the other Islands in south Iran whose name is familiar with most of Iranians is the Greater Tunb. The Greater and Lesser Tunbs are two Iranian islands which are located in the eastern half and northern half of the Persian Gulf. In this island, there are high hills which are located in the northern part of the island and its south part is smooth and suitable for harbors.

For reaching this island, you should take a trip 156 kilometers from Bandar Abbas.

The azure beaches region of the Persian Gulf has a variety in culture, history and attractions which by having a trip there you could enjoy the complete treasure of tourism by real sense. One of the other islands in south of Iran which is a spectacular one is Siri Island. This island is also known as Seri or Soori. This beautiful island on the southeast of azure waters of Persian Gulf is located in the 30 miles distance on southwest of Bandar Abbas port.

The vegetation of this area consists of plants that have the ability to store water.

After the tourist islands introduced above, now it is time to introduce Khark or Kharg island which is one of the important oil exporting ports in the Persian Gulf. Oil producing activities in this island dates back to 6 decades ago. This coral reef island has been an important island since the beginning of the sailing in the Persian Gulf.

The climate of this island considering the place it is situated is hot and humid in the summer and mild in the winter. Hence the best time for traveling to this island is end of fall and winter.

One of the other residential islands which is on the list of south Iran islands. Booneh island with two other islands naming Dara and Ghabre Nakhoda is located in the far end northern part of Persian Gulf in span of Khor Mousa in Khoozestan province.

We hope our Full Introduction to Iran’s South Islands have been helpful for planning your trip. Of course we always look forward to hearing from you in the comments or contact page.