Introduction of Fin garden in Kashan

Iranian gardens are considered as the best architecture examples in the world because they are a combination of history, architecture, art and nature. This uniqueness is impressive enough to be used even after passing hundred years in architecture of building new gardens and attracts all eyes. But the garden we’re going to speak about in this essay is Fin garden in Kashan which is very popular and famous garden in this city. This garden is a top example of Iranian gardens architecture that its name is registered in UNESCO as well. Stay with us Travitel website and get familiar more with this beautiful and unique garden and what has happened in there during the history.

At the same time you enter this garden the unique effects of that will enchant you immediately in a way that the time runs out. Inside the garden trees are up to the sky, short and tall fountains and also the sound of running water in heart of pavements of garden all together enchant every visitor.

The space of this garden is about 33700 square meters and walls, cylindrical shape towers and reins are round the center yard of garden to exhibit it as an Iranian garden. With using these walls and towers the inside people could be in a safe and calm place and felt a royal glory.

The philosophy behind the garden’s name

This garden used to be called Shah garden for the meaning of the Shah word which is big and mentions the size of garden. But today this garden is known as Fin garden and the reason of that is being in Fin region in Kashan. The word of Fin has root in Fina which means a kind of hat the previous people had used it in past. 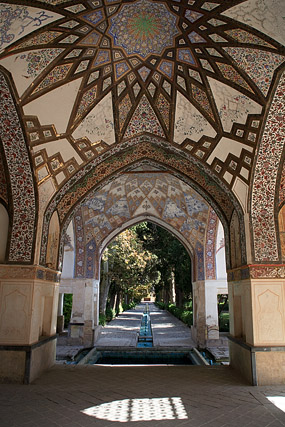 The architecture of Fin garden

In terms of architecture, the Fin garden has followed all the necessary standards of building a garden. The thing which is seen the most is tress and running water. They are actually the live and attractive elements of this garden which have could create an interesting place beside the buildings and monuments that are the fixed architecture elements of garden. Including important pillars used in this garden is maintaining symmetry that was very important once but with interference of different kings has been decreased during the time. The most amount of asymmetry of this garden has existed in Safavid dynasty time.

The reason of using water element in garden

The most important reasons of using running water in this garden are including creating comfort and calmness in people souls, making the air cooler in summer season and resonating voice of water especially in non-residential parts.

There are two ponds in this garden including;

It’s one of this garden’s ponds which it is very interesting. The reason of that is its tile flooring with a pattern of Kashan carpets. It’s very high quality tile that there are even some gold used on it. Unfortunately robbers attacked the garden and stole some of these tiles. Many people tried to repair those tiles but they weren’t successful.

In Fin garden there are 160 holes inside the pond which each of them considered as a flower in carpet. The first hole acts as a fountain and the second one sucks the water inside the ground. So in this way there are 80 fountains and 80 sucker holes and therefore there would be same amount of entering and exiting water and no extra water will get out of the pond. Today the water of this pond is passing through the garden by 3 tiled streams. 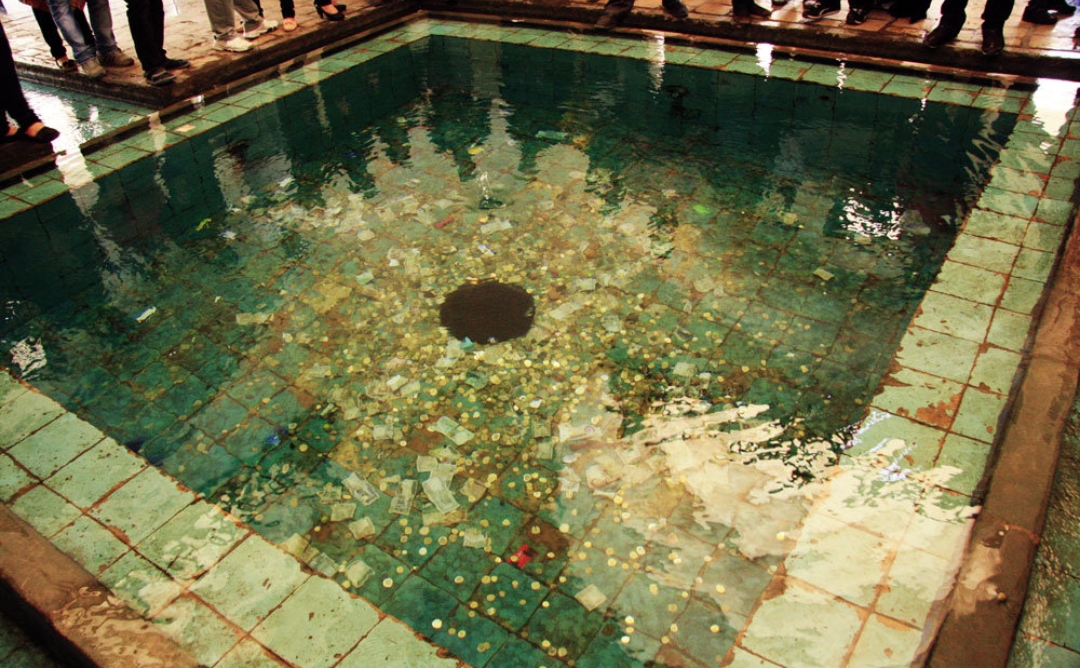 This pond was built at the same time with Joosh pond in Mohammad Shah Qajar dynasty. Today it’s known as 12 fountains pond. These ponds make the water to move vertically without any external force. 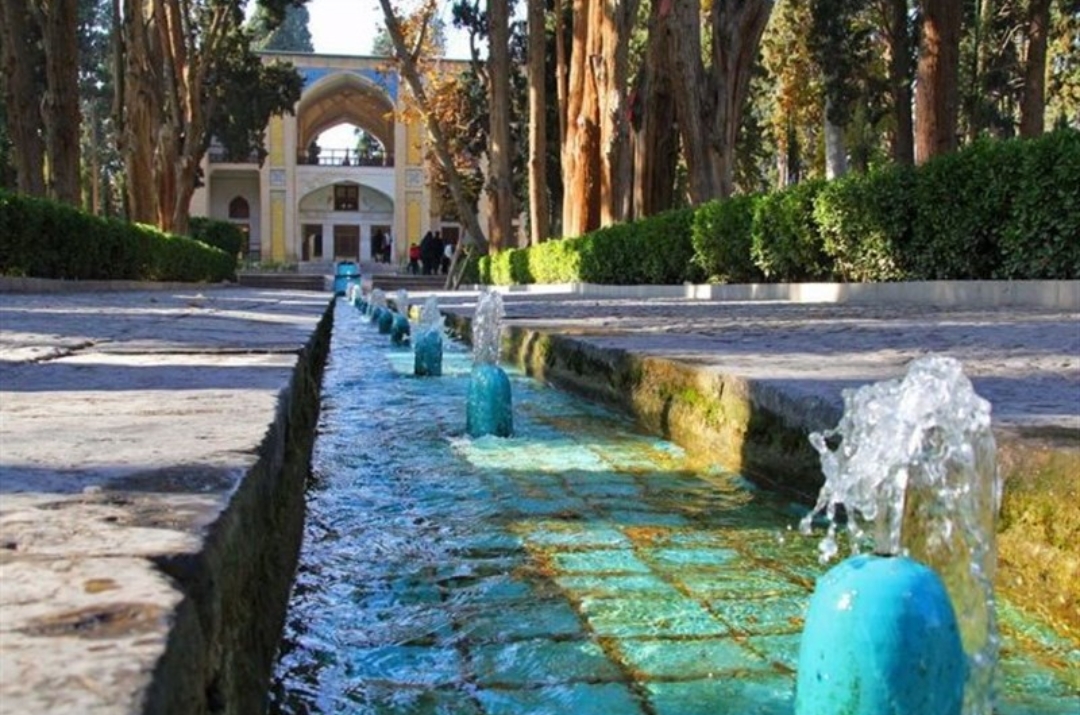 This is one of the most famous parts of this garden. The reason of their popularity is for the first minister Amir Kabir was killed in this bath. 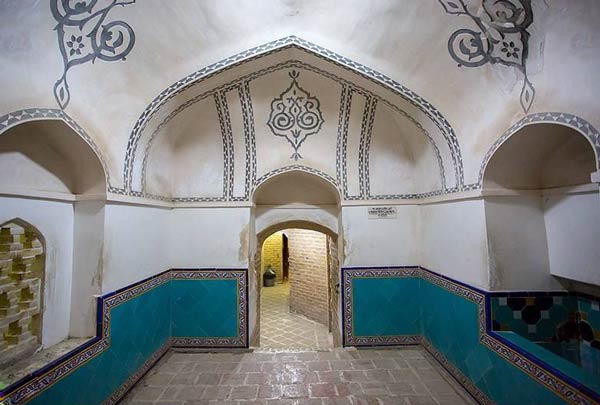 The other building which surely fascinates you in Fin garden is the Safavid Koshak. Its date goes back to 5 AH period. This monument was built at the behest of Shah Abbas and by effort of Khazr e Nahavandi, the ruler of Kashan in the center of the garden and in front of the garden’s gate. This monument had 4 floors in past and 2 upper floors were in the shape of pyramid but this part was damaged in earthquake in 1156 AH. Today this building has 2 meters height and materials have used in it are carcass stone in foundation and crude bricks in the walls. We suggest you to visit this monumental sight. 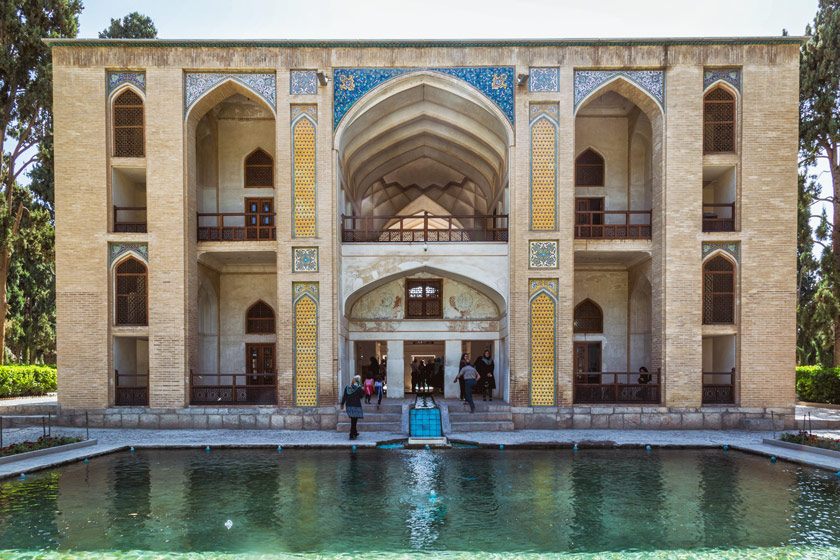 There is also a king’s arch in the garden which was built in 1218 AH at the behest of Muhammad Shah Qajar. All around of this building there are rooms called earrings which actually a space for crew. According to the respect they gave to Shah, they never entered the room through the main doors but always the side doors. The formalities of that time were done in front of the windshield and by the dock of the room. 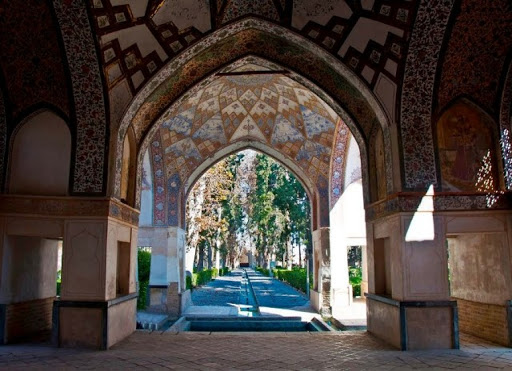 By passing the king’s arch and next to Qajar Koshak you’ll see another monument called Tea House which used to be called women fountain. In this section, all the logged water divides into gardens and the third of main fountain’s water flows into 3 branches and continues to the garden.

This is another building which was build at the behest of Fath Ali Shah in 1189 AH. This monument is also known as Shotor Golu or Fath Ali Shah Sufeh. 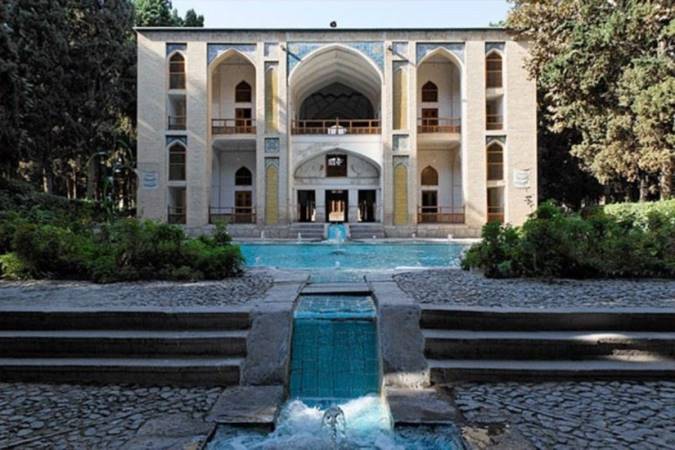 In some part of this garden there are Karim Khani yard which was built by effort of Salim Arani. This part is including a small yard, 5 doors rooms and simple rooms and the date of building returns to 1141 AH.

And finally the last section in Fin garden of Kashan we’re going to mention it is the national museum. This museum was built by the effort of Muhammad Taghi Mostafavi the director of archaeology in 1963 on the remained ruins of the Nezam O Doleh. This museum is divided to 3 parts including; archaeology, anthropology and handicrafts. There are more than 400 pieces of earthenware belonged to periods before Islam and many bronze and ceramic objects, garments, scribbles and all kinds of tissues after that exhibiting in this museum.

Fin garden of Kashan access ways and time of visiting