Isfahan is one of the most spectacular cities of Iran which many domestic and foreign tourists visit it every year. A city full of historic sites and architecture attractions which makes everybody amazed and all visitors admire the art of builders and architectures of this city. But nothing is like staying some nights in one of tradition accommodations of Isfahan in order to complete the experience of this trip and taking you bake in those old years.

The period which in people lived in such a beautiful and ancient houses and there were no modern building. We must say the sights of this city are not limited to just ancient monuments and this city has natural attractions, splendid handicrafts, delicious food, local pastries and also herbal extracts.

Follow us in this article for a short trip in Isfahan and passing some nights in the best traditional accommodations.

Shah Abbas hotel or the Abbasi guest house is one of the most beautiful residences in Isfahan that is built in the center of the city. Although the building of that was opened in 1345 AH but the architecture is taken from Safavid period and CNN named it the most beautiful hotel in the Middle East in 2017. This hotel has 224 rooms and suites which are serving according to the international standards. Many important people choose it to stay every year.

Including services and facilities in this hotel are; having clean rooms, TV, en-suite bath, free wireless internet, conference and meeting salon, souvenir shopping center, special smoking room. The main feature of this hotel is locating in downtown and having easy access to historic attractions and trading centers. This hotel has also 2 swimming pools and 3 restaurants.

It’s one of the best traditional residences, which was built about 150 years ago in Qajar period. It’s been repaired in 2018 for guests to feel more comfortably. The 2 floors hotel has 17 custom rooms and 34 persons can be there at the same time. Like the other Iranian old houses there is a tiny pond in the middle of yard which is decorated with some vases around it. This hotel is locating in traffic plan and has no car park. Some rooms may need to climb through the stairs and people with limitations and children might finds it hard.

Including facilities can be mentioned here;

This is one of the best custom accommodations of Isfahan and its archaism returns to 250 years ago in Qajar period. Khan Neshin with 17 meters heights is the highest beautiful historic house in Isfahan. There is a tiny pond in the middle of yard and colorful glasses of the building complete your dreams of travelling in past time. Rooms have custom plasters and are designed according to the time of building the hotel.

This hotel has 10 rooms which one of them is VIP and 45 people can stay there at the same time and the possibility of offering food, using facilities like car park, flush toilet and squat toilet, split, radiator and free wireless internet in Khan Neshin is prepared as well. If you’re going to have an excursion in city, you can simply reserve a tour. The tour leader will take you to the tour and explain you about the history behind every monument in the city.

It’s a newcomer complex which has been opened in 2011 and upgraded in 2015. The building has 60 rooms and easy access to spectacular sights of the city like; Jameh mosque, Menar Jonban, Ali Qapu Mansion and Chehel Sotun. The hotel is located out of traffic plan and the car park has capacity for 80 cars. Thre is a coffee shop on roof with a great view of the whole city.

Including facilities we can mention are; having refrigerator, free WIFI, restaurant, flush toilet, telephone, prayer room, and lobby. Most of the guests in this hotel are foreigners and the atmosphere is like an international atmosphere. If you’re interested in getting familiar with foreign tourists this hotel can be a good choice for you.

This hotel is one of the best residences of Isfahan which is located in a short distance with popular historic buildings of the city. This house was built in Pahlavi period and upgraded in 1996. The custom area and its historic atmosphere take you to old years. Do care most of the access ways to rooms have stairs and using them might be difficult for children or limited people. This hotel has 5 different types of rooms in a custom way of Isfahan.

This house is registered in national effects and has facilities like; free internet in lobby, laundry, safe box, room service, luggage room and coffee shop.

This hotel can be put among the best traditional hotels in Isfahan as well. The monument is related to 400 years ago in Safavid time and today it’s located in downtown. Despite the old archaism, has all the needs of today’s life and is equipped with the necessary facilities.

This 3-star hotel is a quite suitable place for knowing past customs. Staying in this hotel is free (if they don’t use any extra services) for the children less than 6 years old and facilities like; free WiFi, flush toilet, restaurant, refrigerator, telephone and car park are prepared as well. The access is very easy to the spectacular sights of the city and you can reach to Chehel Sotun palace and Imam square with only some few minutes walking.

This is another traditional accommodation in Isfahan which has been remained from Safavid period. This 2-star hotel is located in one of the oldest neighborhoods in Isfahan. You can easily go to bazaar from here and also it has a good access to the terminal and downtown. In 2000 a master of architecture took the responsibility of repairing the house and rebuilt it according to its old elements and features.

One of its unique features is the possibility of passing night in the yard. The breakfasts have a great and high variety and there is only 10 minutes to Charbagh Street. Take care this hotel is located in traffic plan and it has no car park. 45 people can reside in it at the same time.

It’s a house with the splendid architecture of 200 years ago which was rebuilt in 2013. This is one of the traditional accommodations have registered in national effects of the country. This hotel has 2 inside and outside yards and it has also an easy and suitable access to shopping and entertaining centers. This beautiful complex has some different rooms which the best of them is Shah Neshin.

Including historic and custom features can be mentioned are the water with green trees. It’s so beautiful you can tempt to stay in yard and drink tea and not go to the city.

Although Bali hotel is put in the list of the best custom residences in Isfahan but it has no much archaism and its builders have tried to build some traditional areas and rooms in old past ways to take you to those years atmosphere. These rooms are muddy and of course there are modern rooms in this hotel as well and guests can choose according to their own taste.

This hotel has a very little distance with desert cities and it’s a suitable place for watching the full star sky of desert. The tourists who are going to visit the desert and participate in desert tours can choose this hotel. 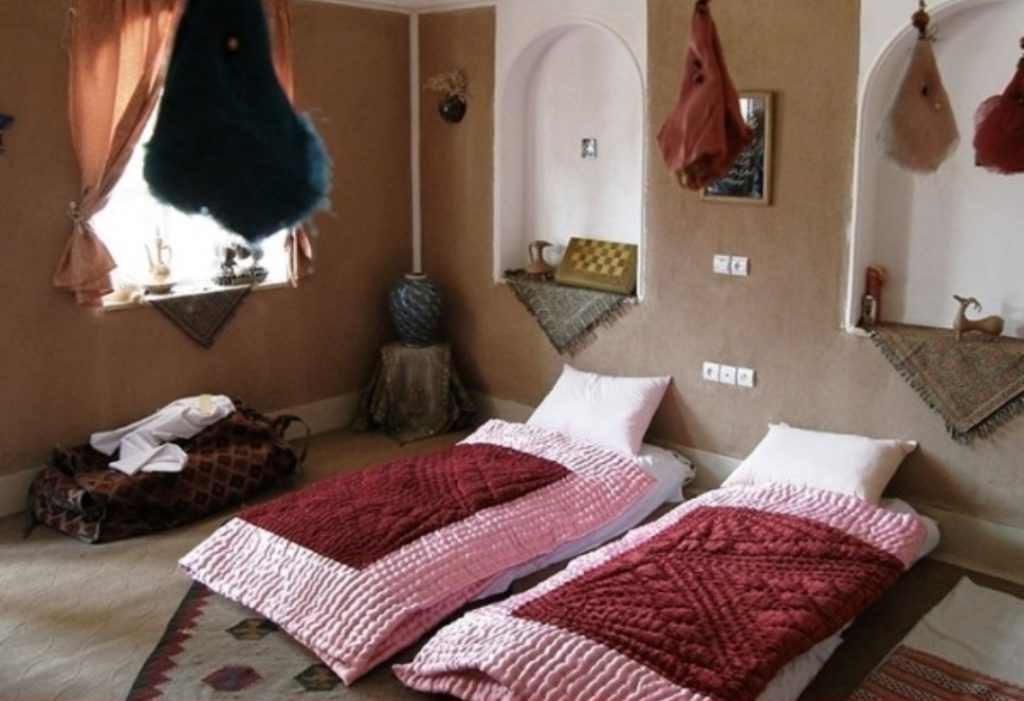 This complex was built in 2009 and it has more than 6000 square meters space. The complex has 40 double to six some rooms. Take care there is no bed in traditional rooms and you must sleep on the ground.

One of traditional accommodation of Isfahan which is located in west of the city and you can easily access to city facilities and historic attractions and have all the modern facilities beside the custom appearance. The building of this hotel is 80 years old. There is a coffee shop on roof and guests can enjoy the drinking tea or coffee in it. Facility like Korsi is prepared as well.

There are 16 rooms in whole which 2 Shah Neshins are the best ones of them. All rooms are equipped with minibar, TV, telephone, refrigerator and WiFi.