One of the most fascinating tourist attractions in any destination is speaking of gourmet and the food in that city or country. In recent years, the discussion of street food has become very important, and in every country there are several food vendors beside each other and each one’s offering a world of delicious and hearty food at affordable prices. . Some of the most famous street foods such as Ban Mei in Vietnam, Roll in Turkey, Hale in the Philippines are popular among tourists and people of these countries, but we are going to talk about the best places to eat Tehran street food. If you are interested in Tehran tour and street food follow us for some few minutes.

Usually when it comes to discussion of street food in Tehran, everyone is reminded of Si-e Tir Street, but this is not the only popular option. Another street that can be named is Dolat Abad Street in region No.20. This street was working in this field very earlier than the previous street the Si-e Tir, and in fact, it can be said that it has a great acquaintance in Arabic food such as Falafel and Samboseh.

Maybe you ask why Arabic food in this street! Because many Arab people live in this neighborhood therefore this street is an interesting place for tasting different kinds of Arabic food.

In order to access Dolat Abad St you can take the subway to Rey and then going to that street would be very easy. There’s also taxi and bus station next to subway station.

It’s another old neighborhood in Tehran which is suitable for tasting different street food. In this place you can find anything you wish so you can taste best street food here. In each hour of the day different people have sold sandwich, Sambouseh, Ash and Adasi on their wagons. The variety of food is very high in here.

One of the alleys we recommend you to go is Seyed Vali alley which you can eat various food like egg, potatoes and Falafel in there.

For reaching to Grand bazaar you can easily take the subway and get off in Panzdah-e Khordad station. You have to go there during the day as this bazaar is closed at nights. Under no circumstance we suggest you to go there with personal car because this area is on traffic plan and streets are so crowded you won’t even find any empty place to park the car. 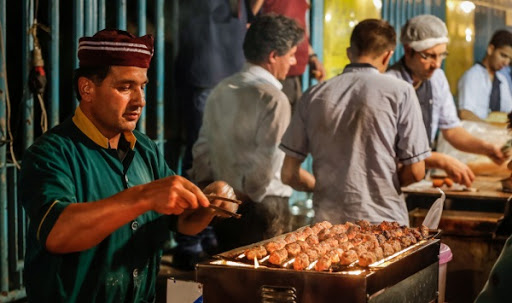 From 2016 this paving street has turned to a place for people who are interested in street food. Here is one of the oldest streets in Tehran history which many important things had happened on it such as nationalization of oil industry in Iran. There are many museum, galleries and old houses along this street that has caused municipal officials do something for attracting more tourists in this street.

When you enter this street you’ll see many different food vendors along the street and also many people walking on paving street and taste some food. Restaurants in here with beautiful lightening and live music host many people every night.

This street is located in heart of city and you can take the subway and get off in Ferdowsi station and access there easily.

It’s one of the other streets which in you can find many Kebab vendors. Some of them even work there for more than half century. You can taste different types of Kebab like; chicken, meat and liver. The advantage of here is that you can offer food even after midnight. This street is located between Shohada and Kolahdooz St and you can take the subway or even bus to get there.

Azadi square, a shelter for passengers

Another place you can choose to eat street food is Azadi square or, in fact, the West Terminal. The boom of street food vendors in the area is for high volume of commuters traveling there and you can taste delicious foods like liver, cold and hot sandwiches, especially spicy food.

Access to Tehran’s Azadi square is one of the easiest things in the world, as you can easily reach the Azadi square taking subway, bus, taxi or your personal vehicle. 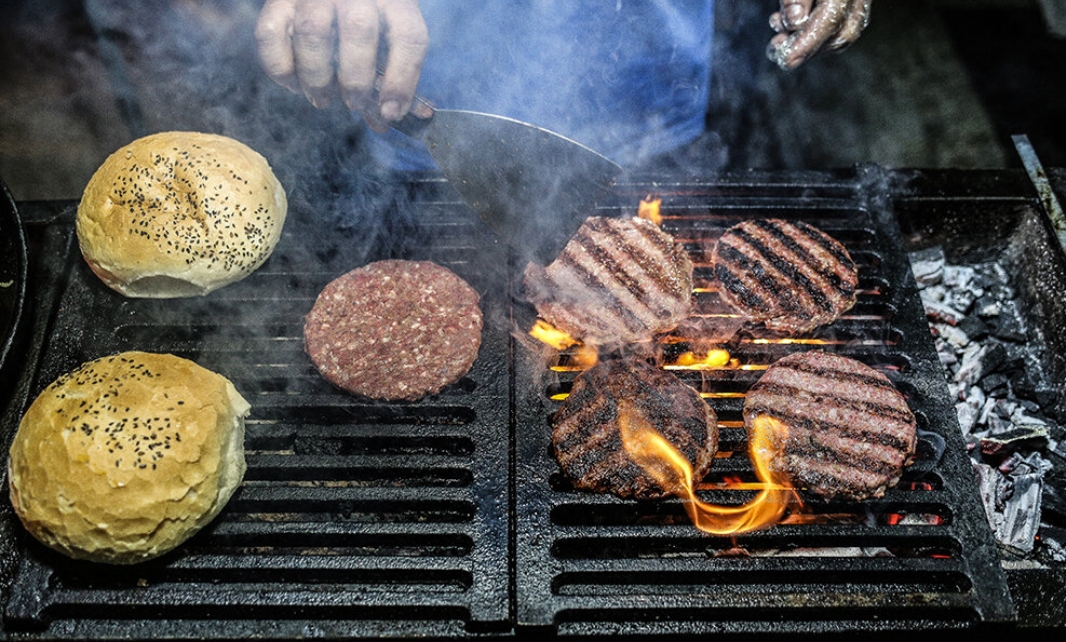 The pleasure of a hearty tea in Azari tea house

One of the best and oldest tea house in Tehran is placed near the Tehran Rah Ahan Square in south of the city. This Iranian cozy place for its traditional flavors has made people go there from the other side of the capital for a night out. Azari House Tea in a pure Iranian atmosphere and live local music is ready to welcome you at any time of the day, even at midnight.

A place for liver lovers in capital

So let’s go to one of the most exciting and the most famous regions you can eat street food there. Bahman Square in south of the town is a place for liver lovers. It’s a square with lots of liver vendors which do the activity for many years and have many constant customers. You can go there and eat liver whenever you want.

Now that we have introduced the most famous streets of Tehran to find street food, we would like to name a few of mobile cafes in capital that the number of them has increased in last few years and have become popular among people.

These cafes do not have a specific location and you should follow their social pages to find out where they are located, as they are located in different spots of Tehran each night.

Pin Cafe has embarked on the cafe industry with the aim of cultivating it. In the Pin Cafe you can buy books besides using menus that include a variety of hot and cold drinks as well as sandwiches, which is a great idea. 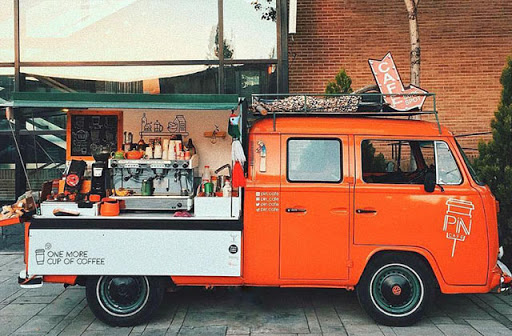 Rover cafe which is a van is famous for its hot dogs and, of course, its chairs are also famous. If you want to taste the hot dogs in this cafe, we have to sit on chairs which are made by the owners and from barrels.

Combi is another mobile cafe in Tehran where you can try all kinds of hot and cold drinks and delicious sandwiches. The cafe is just a van and of course its owners leave a few seats for customers as well.

The staff of this cafe who are a young couple, plane each day for tomorrow and show their statue and location through the social network. The menu is included the different cold and hot drinks and sandwiches. Make sure to follow their social page to find out where they are each day.

The charm of street food is so much that many people are tempted to buy plane tickets, hotel reservations, and sometimes even traveling tours to get to their destination and become familiar with the food culture of that country. 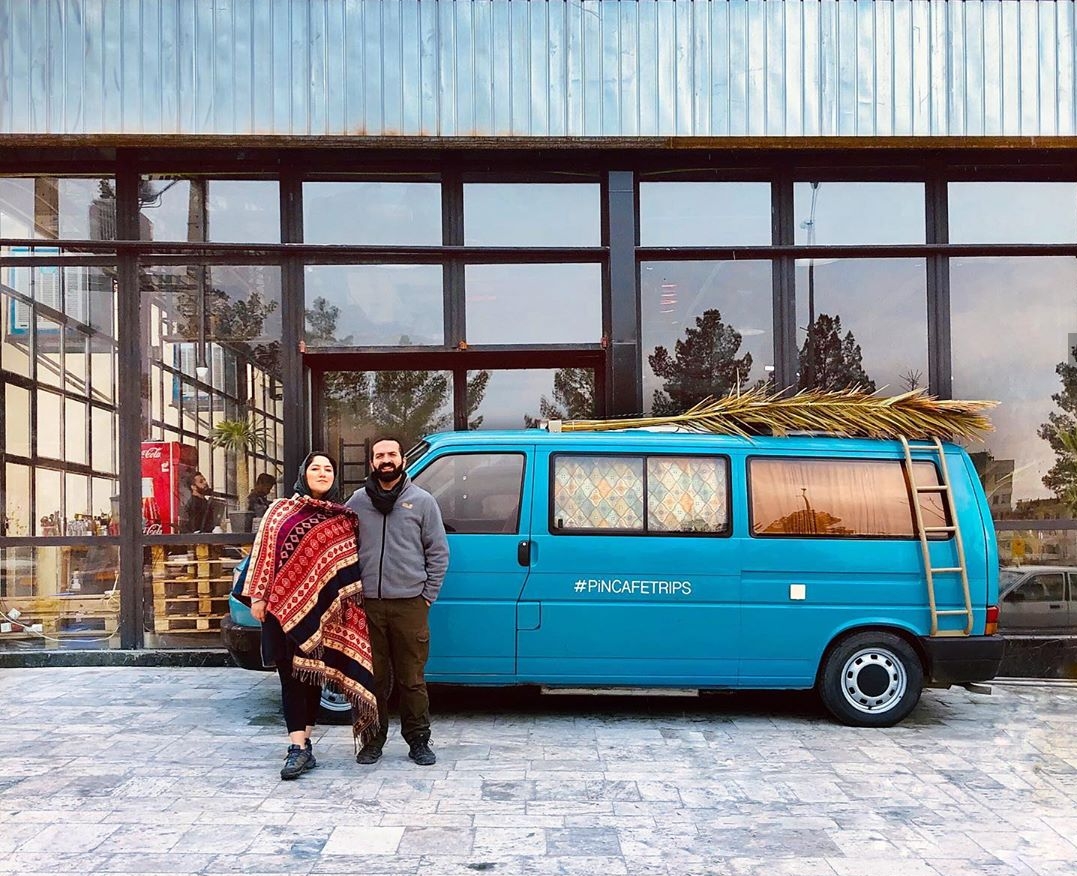 Lastly, if you have any experience about street food in Iran or any country, I would be happy to read that in comments section 🙂