This example has become a principle about our historic and spectacular Iranian city of Isfahan: Isfahan, Half of the world. Yes, Isfahan or as we call it half of the world is beautiful to the extent that any person who have visited it, has been satisfied by its historical richness and beauty so that he and his family have visited the city several times.

This beautiful city as a reason of its hospitable residents, rich historical attractions, genuine culture and complete facilities is and will be a popular destination for not only Iranians but tourists from all around the world. Hence, today in Travital we want to review Isfahan’s attraction so keep up with us in the following.

One of the most beautiful cities in Iran is the city of Isfahan in the Isfahan province. Isfahan is one of the major cities in Iran and in terms of population is the 3rd most populous city in Iran behind Tehran and Mashhad. The city has so many different titles that as much as how many we name, it would not cover all of them. Isfahan has been the capital of Iran in many different periods, including the Safavid period. Hence, most of the city’s attractions which most of them are historical have been registered in UNESCO. The main thing that has made Isfahan so popular is that the beautiful Islamic architecture of this city has made this city very special in its kind. At present, this city is very important both in terms of tourism and concentration of many industries such as steel and gold in Iran. Now it is the time to introduce you to the best and most famous Isfahan’s attractions and name them in a comprehensive article.

The first attraction of the series of attractions in Esfahan that we would like to introduce to you is the Ali Qapu mansion. This building was built during Safavid era and it was known as Qasre Dowlat Khane or Dowlat Khane Mobarake Naghshe Jahan. This mansion was built on west side of Naghshe Jahan Square which is now known as Imam square. Ali Qapu mansion has 3 floors and each floor contains 2 rooms and hence it contains 6 floors. But wait a minute, on top of this 6 floors there is a rooftop that it is usually used to see the city from the top of the building and it is counted as another 7th floor. This historical building is 36 meters tall from ground to the topmost of its 7th floor. About the height of the Ali Qapu we should say that this building was the tallest building in the city until several decades ago. This building looks as a 5-storey from some angles and 7-storey from the other ones.

Chehelsotoun Palace, also known as Chehelsotoun Garden, is among the best souvenirs of the Safavid dynasty. The Chehelsotoun Palace is a part of the great Jahan Nama garden but it is still very populous. As a matter of fact, King Abbas I built this garden in the Jahan Nama garden and and left it as a memorial for the posterity. It is true that today this beautiful and spectacular garden has been damaged, but it is still one of the attractions of Isfahan and especially it is among the most popular attractions. Please keep in mind that the gate to the garden is on the East side of the garden and the garden has a mild steep. In this garden, there are black maple, pine, sycamore and elm trees in most of the green space of the yard. The garden’s area is 2120 square meters. The Chehelsotoun Palace is among the buildings with rich history and exploring it resembles the exploring of the Iran’s history during the Safavid era.

One of the other attractions of Isfahan, which not only it is itself among city’s attraction, but many of the other city’s attractions are located in it or they are near it, is the Naghsh e Jahan square (in the original genuine dialect of the beloved Isfahanis, Naghsh e Jahoon). This square, which nowadays known as Imam square was considered as the central square of the city was known as Shah square too. Around this square there are many attractions of Isfahan, such as Sardar e Qaisariyeh, Imam Mosque, Ali Qapu, Sheikh Lotfollah Mosque and many other attractions in addition to nearly 200 shops or in older dialects “Hojreh” in this square. Today, you could find best Isfahan’s handicrafts in shops around the square. Naghsh e Jahan square was listed in national monuments list on 1313 and afterwards in UNESCO as one of the first Iranian monuments listed there and it is among the world treasuries.

The Abbasi Hotel in Isfahan, before being changed to its current use, was built by King Sultan Hossein Safavi as a three-part complex consisting of a caravanserai, a bazaar, and a school and it was finally presented to his mother. Hence it was known as King’s mother complex. The complex had been abandoned for some time until the authorities decided use the complex again. Although the hotel is a good suggestion for staying at the city, but even if you did not decide to reside there, we suggest you to visit the place even only for a cold drink. In this hotel you can see the arches of old cracks, large and big walls, clusters and other artifacts dating back to 300 years ago. Another of the fashions that still retain their former form in the hotel are the doors and windows of the complex.

One of the most historical attractions of Isfahan that you must visit, is Hasht Behesht Palace. This beautiful palace was built on 1080 and like other attraction of Isfahan during Safavid dynasty with the direct order of King Soleiman. This building has 2 floors and its style and architecture is Isfahan type. One of the most interesting titles about the Hasht Behesht Palace is that it was once known as the most beautiful palace in the world. From other titles of this palace we could name Hasht Dar Behesht or Hasht Be  Behesht. Decoration of the palace and especially the plaster and colored Vautted is one of the most beautiful aspects of the Hasht Behesht. Regarding the palace you see today, we should explain something important. As a result of private use of the palace during Qajar era, some of the decoration have been ruined. However, even now one of the most famous archaeologists, Andre Godard, says that the palace still retains its beauty and charm after all these changes.

One of the Isfahan attractions which is quite famous is our Sioseh Pol. Sioseh Pol which is also known as Pole Allahverdi Khan, is 295 meter long and 14 meters wide and as it is clear from its name in Persian has 33 arcs.This bridge is also King Abbas Safavid and his great dynasty’s heritage in Isfahan. Many people know this bridge as No.1 and best bridge in the world. Although Zayandeh Rood is nowadays dry, however Sioseh Pol is still beautiful and attractive.  In building Sioseh Pol materials such as plaster, stone, mortar, brick and mortar have been used. On both sides of the bridge, there are indoor vaulted arches that run across the bridge from one end to the other, creating a narrow, roofed walkway on either side of the bridge. This walkway has 99 arcs that previously they have been painted however today there is no sign of the paintings. Sioseh Pol has been registered on national heritage list. One factor that has caused the Zayandeh Rood river to dry up and Sioseh Pol at risk is that a 40-meter tunnel has been dug for the subway in the area.

One of the very historical attractions of Isfahan is the fire temple. It is been told that this historical monument is from Sasanian Empire era. This fire temple belongs to Zoroastrians and it is located in Najafabad, 8 kilometers from Isfahan. The walls of the fire temple is made from grout (mixture of water and clay) in circular moldings. This monument is completely ancient and it is the 3rd biggest monument in Isfahan. This fire temple has been built during kingdom of king Ghobad from Sasani dynasty. This fire temple has been registered as national heritage as no. 330  on 1330. The building is octagonal and hence it could have a view from 8 sides and It has a perfect view of the surrounding plains up to 100 meters high. The old name of this fire temple is Mehrbin Dej or Mehrbin. It been said that Zoroastrian priests kept this fire going.

Address: Road from Isfahan to Najafabad 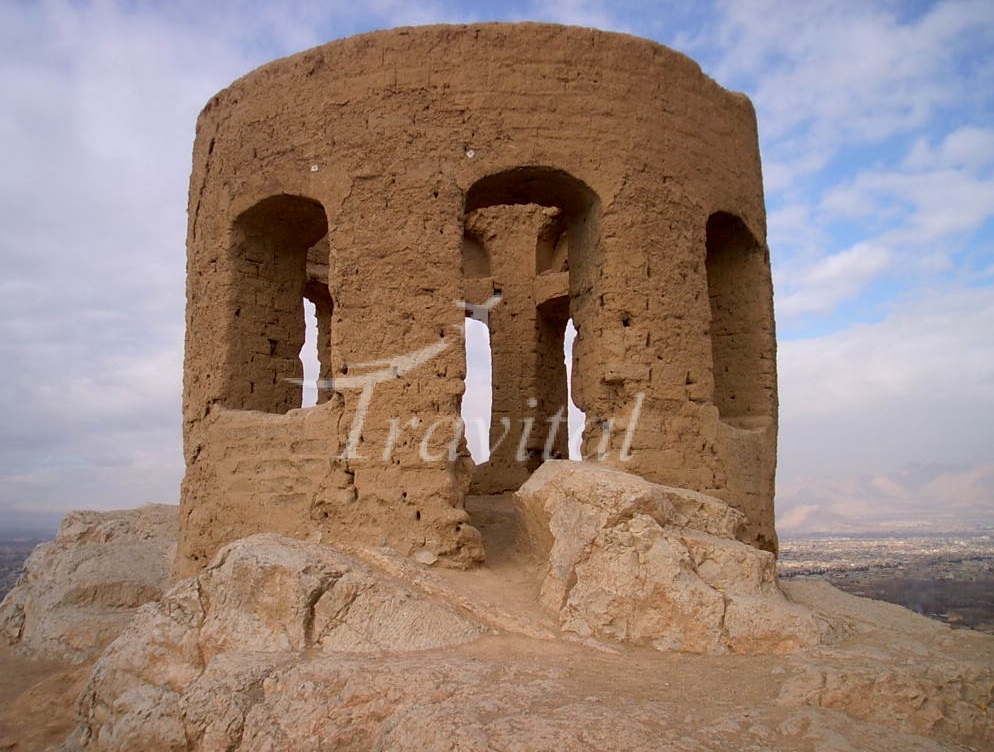 The oldest monument from ancient times exists in Isfahan and it is a monument similar to a fire temple that is located on Isfahan Road to Najafabad near Menar Jonban on top of a rocky hill. Most of Islamic historians such as Ibn Khordadbeh, Hamdollah Mostofi and Ibn Hawqal have referred to this monument and called it a fire temple. Foreign scientists as well have studied and investigated the fire temple and Maxime Siroux and Andre Godard from France are some of them. The important feature of this monument is the bricks building the current ruined fire temple that few monuments have such bricks in terms of their size. According to experts, these bricks are made of mortar and mud with small pebbles. They used to also add the reeds around Zayandeh Rood to add to its stability. The ...

Again we want to introduce you to a historical monument from Safavid era which is one Isfahan attractions. Qeysarie Gate which is located on ISFAHAN’S Imam square.This building used to have 3 floors but nowadays it has 2 floors.On the 3rd floor of this monument, there was a porch. Also Qeysarie Gate used to be connected to the Isfahan Grand Bazaar. Above this monument there are paintings of the bells of Deir Hormuz and Reza Abbasi.