Islands on south of Iran are spectacular destinations for having a dreamy vacation and they will make you to have a memorable trip. Among the beautiful islands in the south of Iran, Kish and Qeshm are more popular between the tourists and they are well-equipped  with amenities for the visitors. If you have not decided which island to travel to and you are looking for comparisons between these two islands keep up with us in Travital to introduce you to the characteristics of these two islands so that you could decide with full awareness which exciting island to travel to. 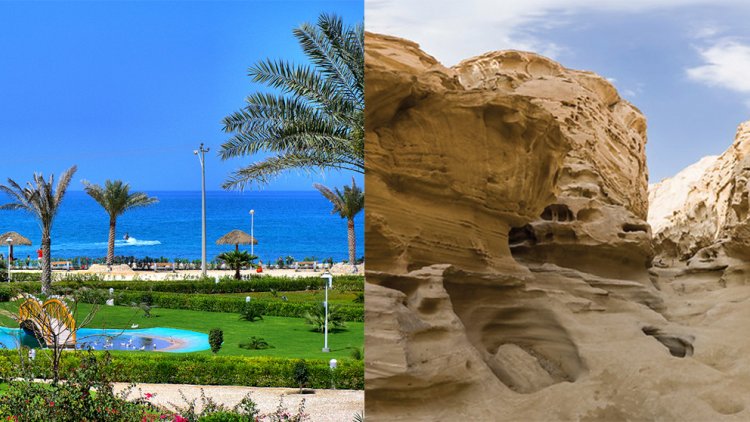 Kish Island has an area of 90 square kilometers and the maximum altitude of the island reaches 35 meters. There is no permanent river on the island and underground water reserves are used. The climate of Kish Island is hot and humid and the average temperature is 26.6c. In kish rains are seldom and the only rainfalls occur in winter and in the form of thunderstorms. The island has palm trees, hornbeam, eucalyptus and laurel and in recent years its vineyards have become famous.

For comparing Kish and Qeshm, we now review the geographical characteristics of the Qeshm Island in south of Iran. The area of the Qeshm Island is 1491 square Kilometers and it would be interesting to know that this number is two times the area of the country of Bahrain (second largest island in Persian Gulf). There is not much difference between the two islands in terms of climate and the average temperature of the Qeshm is also 26c. The most important plants in the area are mangrove forests that cover a large area of the island. It should be interesting to know that the palm trees are rather scarce. 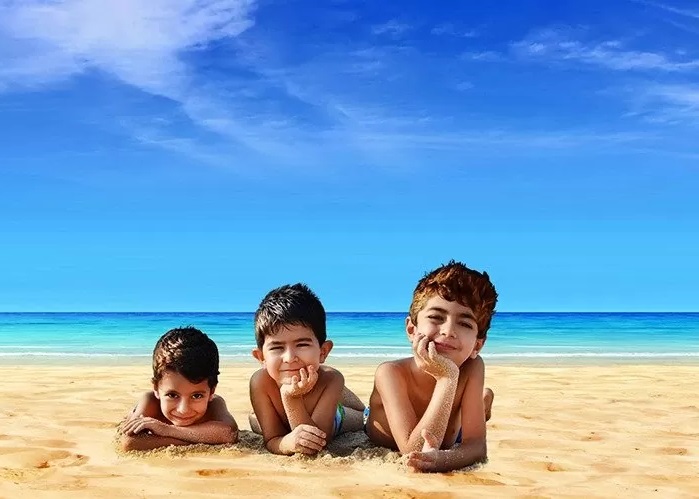 The chief important attractions of the south islands are their dreamy beaches and hence for comparing the two islands we should compare their beaches. Kish Island is a full-fledged tourist island, full of luxury hotels built by the seaside that have comprised a very modern and stylish beachfront structure. All water recreational facilities with the most modern amenities exist and luxury boats cruise the area. Beautiful parks have been built along the shore and exploring them would be sensuous. Across the coast, there is a hiking trail that also has a dedicated cycling area. If you are interested, you could rent motorcycle, bike or scooter and explore the beach with them.

The dedicated region for swimming for men and women are far from each other and both of them are in a different part of the island and both are far from the hotels center. it is possible that the beach on your side be quite smooth and devoid of waves, but on the other side it would be stormy. For this reason, please contact the authorities before going to the beaches for swimming and make sure that the beaches are open and swimming is allowed. The seaside nights have their own excitement and crowds are walking on the beaches till dawn. Restaurants and cafes along the shore are open and life is going on near them. 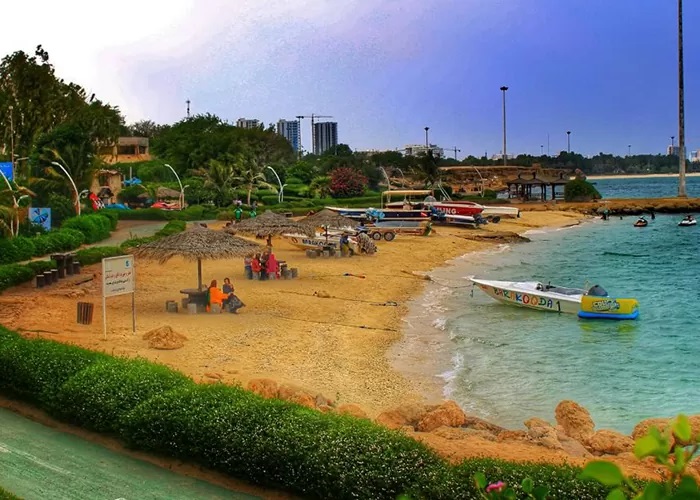 Qeshm however is the largest island in Persian Gulf and it has a variety of beaches. Tourists are sparse so you can easily find a quiet cozy place to rest and watch the unlimited blue sea. In different parts of Qeshm Island there are rocky, sandy, muddy beaches and mangrove forests which each of them has its own beauty. The rocky shore of the Rigu, or Turtle Beach, is also known for its turtles.

Here the sea-side recreational activities are popular and you could try diving, submarine scooter, fly board, banana riding, shuttle riding, Paracel and water park. It is possible to rent a taxi or bike along the shore and if the weather would be cool you could bike in the city too.

Comparing Kish and Qeshm about food, we should say that Kish has a variety of restaurants where all kinds of Iranian and International food are served. All kinds of foods from fast foods to luxury restaurants that serve their guests with expensive dishes and live music is being played. We should mention that the price in these restaurants is high and on the peak of their busiest time in the year, they are more expensive than the luxury restaurants in Tehran.

Food services in Qeshm is somehow different. Here there is no variety of restaurant compared to Kish but all kinds of sea food and traditional south Iran food are served and they could be an exciting experience for you. 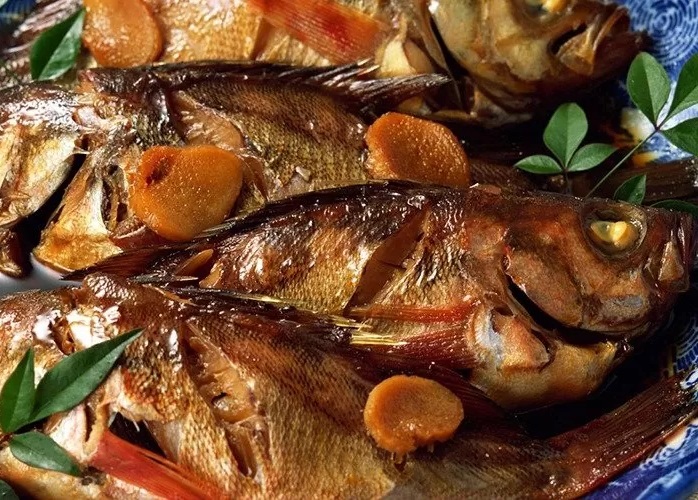 Kish has been a free trade port for years and it has always been a tourist destination. Many people with different budget come to visit this beautiful island and reside there for a couple of days. For this reason, this island if full of different kinds of hotels and residences which are attractive to all types of passengers. From 5 star full luxurious hotels with great amenities and room with sea view to economic motels which you could spend the night on a low budget.

Comparing Qeshm with Kish, we should say that hotels and residences in Qeshm are not comparable with their Kish counterparts and the options are much more limited in Qeshm. Although this does not mean that for residing in Qeshm would be problematic. Here in Qeshm, there are luxury hotels and also more economic hotels that offer good amenities but in terms of variety and the quality of their services, they could not compete with the Kish island which is full of tourists.

Traveling to Kish has long been known for its variety of shopping malls and cheap prices. However, in the beginning we should inform you that the prices are not cheap as they used to be. Although Kish has a lot of shopping centers however you should know about the price of the product you want to buy because it is possible that it would be more expensive in Kish and on the top of buying, you should bear the responsibility to carry it with yourself back. Also, you should make sure that the products you are buying are genuine.
The more expensive shops do not necessarily have better goods and it is possible that in a cheaper shopping center you would find the same product with a lower price. The last suggestion is that do not spend all your time on buying and make sure that you spend some time exploring the island, sightseeing and entertaining.
Comparing Kish and Qeshm, we should say that Qeshm is also good for shopping and the prices are lower than Kish. Qeshm is also a free trade zone and it is full of shopping centers and bazaars that you could buy high quality goods with reasonable price. It is also very useful to know the price of goods in your city and compare them in Qeshm markets and this would help you have a better shopping. It also worth mentioning that in the summer people less travel to Kish because of the weather and hence if you are planning your trip to Kish for buying, it would be better to do it on this season. 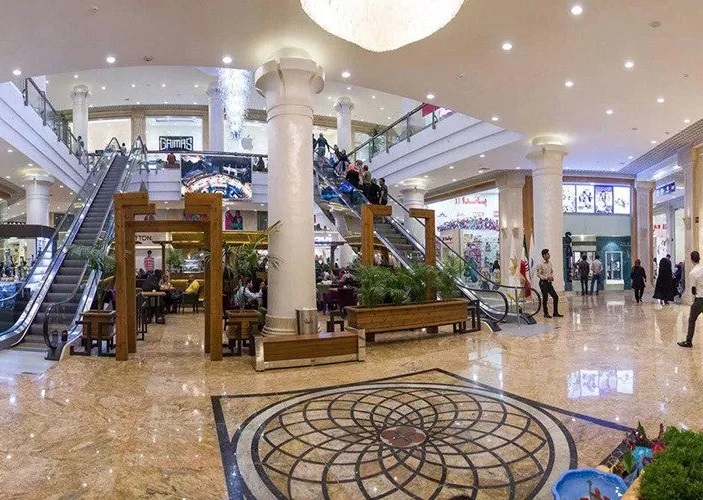 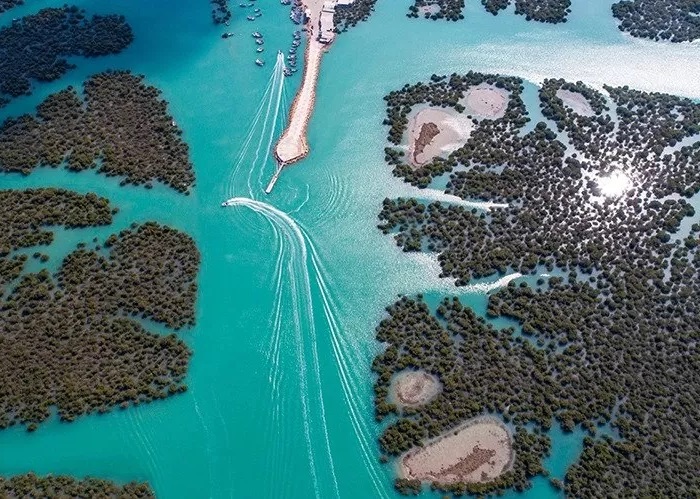 One of the most important parts of comparing Kish and Qeshm is the ways to access them, which can be said they are almost identical. For travelling to Qeshm, there are 3 options which 2 of them are by land and sea and the third one is by air. You could go to Bandar Abbas by car or bus and from there you could take a ferry from there to the Island. If you would like to go to the Island with your car, you should drive from Bandar Abbas to Bandar Pol for 30 minutes and ferry your car to the island with yourself.

One of the best and safest ways to travel is to travel with trains. Trains go to Bandar Abbas from Tehran. Make sure to reserve the ticket a few days ahead because they usually get sold out soon. From the train station in Bandar Abbas to Haghani dock is 20 mintues with taxi. Also if you have time before departure, exploring the Bandar Abbas is a good option. Ports listed below take passengers to Qeshm.The cost of Entering Qeshm with car in 1398 SH is 75000 toomans and for returning you pay half the enterance price.

If you would not to bear the long trip by train or car to your destination, then flying to Qeshm is a good option. Tehran-Qeshm flight takes 1 hour and 50 minutes and you would not have to stand a tiresome journey and you will save time. Airial distance from Tehran to Qesh, is 1072 Kilometers. 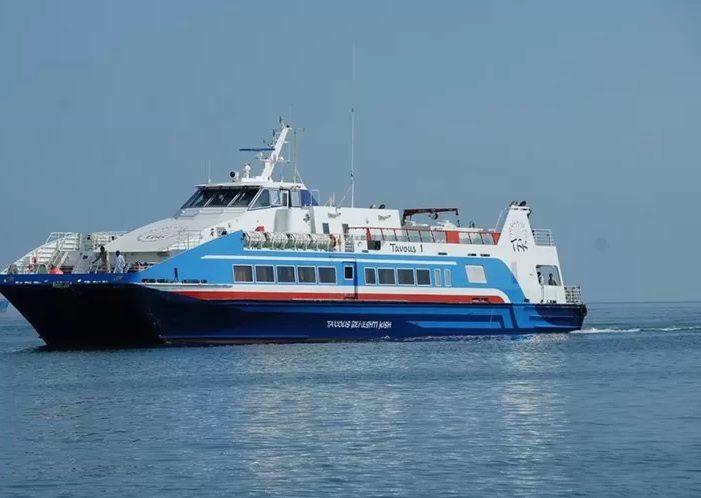 If we want to compare Kish and Qeshm based on access ways, we should say that they are more or less the same. Kish’s access routes are the same three pathes but the ports which have sea bus and boat are as follows:

Cost of entrance for a car to Kish is 350000 Toomans and if your vehicle is made in Iran, it should be produced on 1395 SH (Solar Hijri) and later and if it is made in foreign countries it should been made on 2010 and later. For entering with cars built in Iran on 1390 to 1395 SH and cars built on 2005 to 2010 outside of Iran, you must have confirmed hotel reservation with yourself. Please remember that all passengers must have valid ID cards with themselves.

Please note that all sea routes between Bandar Abbas and the Islands are open from 6am to 11pm and schedules may be delayed due to the stormy sea. So it’s best to check the weather in advance.

A direct flight to Kish is another option for traveling to the island and from Tehran you will be on board the plane for about an hour and half. You can also rent luxury cars on the island. Remember that you can use the Travital service to buy train tickets and book airplane tickets.